Recently we have been on a bit of a vegetable kick. 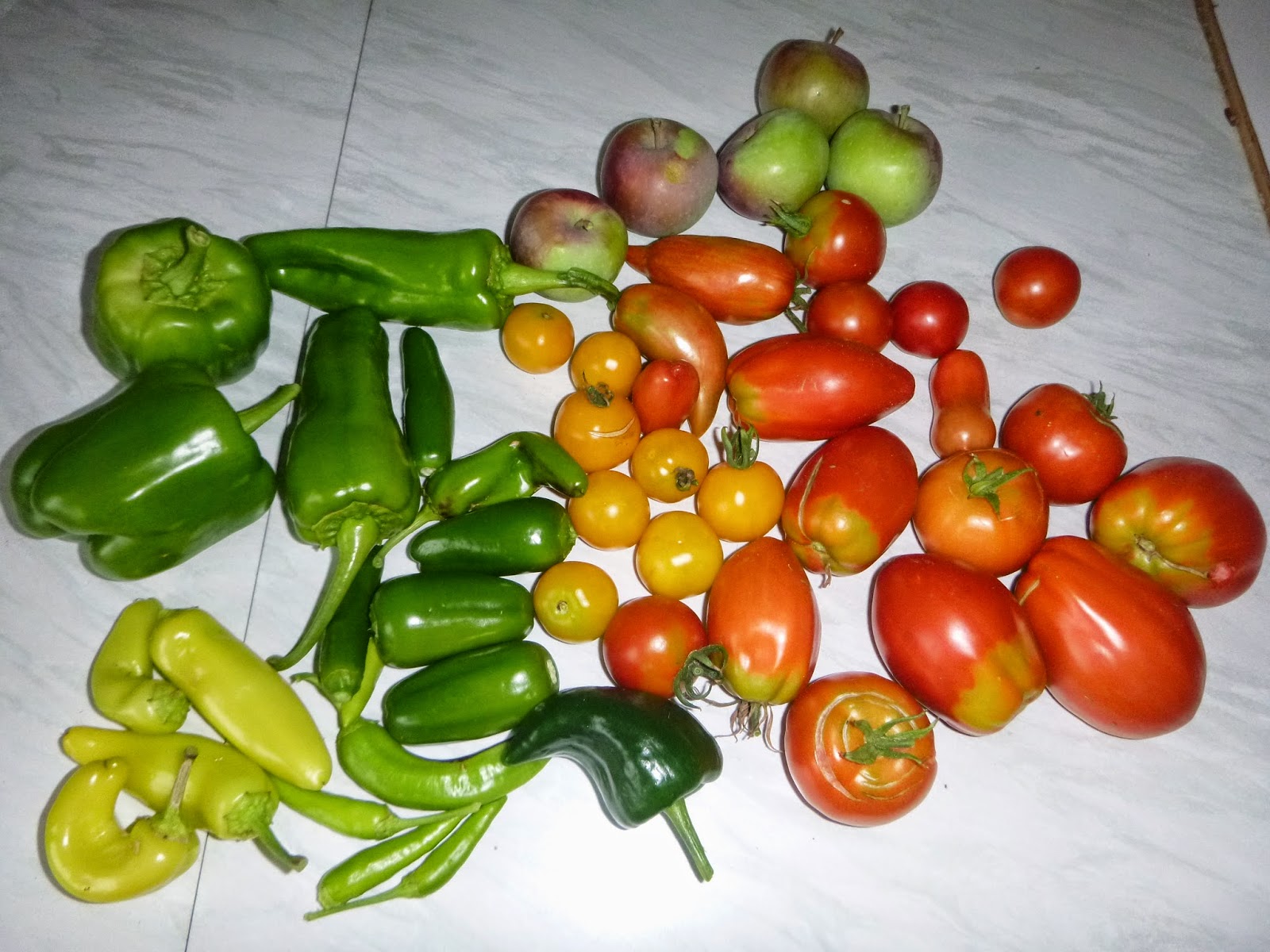 The garden is dishing out these tasty treats now that we are well into August.  Lots of salsa, both fresh and cooked is being eaten as the summer winds to a close.  We are also at the tail end of a borscht frenzy.  Here is the Mrs. working her magic.  We make the Doukhbour version that you get here in Grand Forks.  I don't think we would fool an old timer but we think it is pretty good. 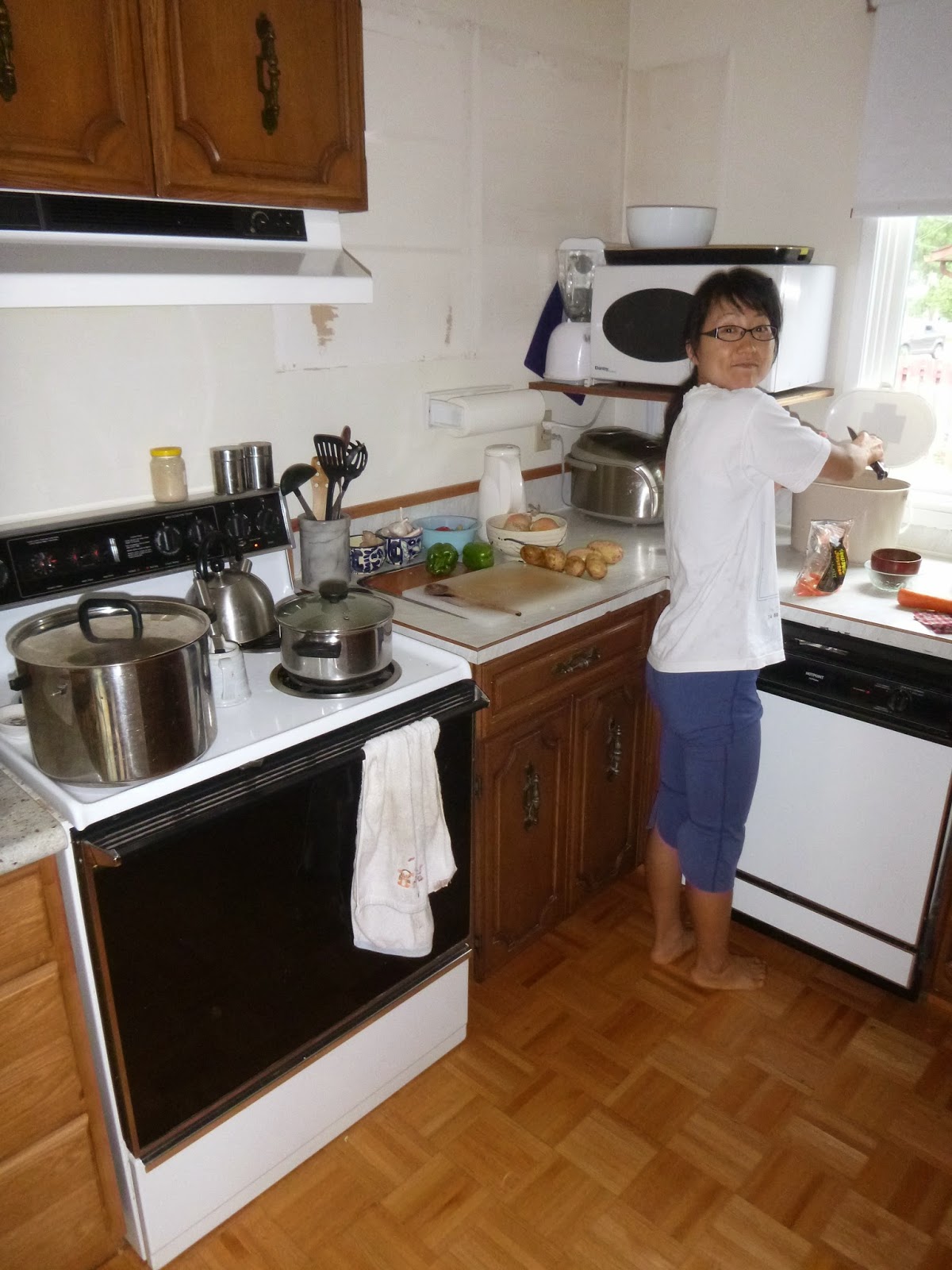 On the bread front we continue to make sourdough and are fiddling with technique now that we don't use the cloche anymore.  We have had some really great loaves recently.  We have also had some duds.  We are also slowly increasing our reach and even have the occasional new customer.  Looking ahead we are in the hunt for a counter top mixer.  I would love a hobart but that is for the day we go truly commercial.  Currently I am trying out the ankarsrum assistent.  Apparently it takes some getting used to as my pizza dough last night can attest.  We plan to give it a run this Tuesday when making our sourdough.  Pricey but it sounds like it has great longevity on its side.

Well it was another great summer of swimming for the Dunnets.  We had lots of best times and made a bunch of new friends.  This last weekend we were in Kamloops for the Provincials.  Kohei and Kiyomi both had 4 individual races and both were part of some relay races.  Kohei had some good races and enjoyed playing Pokemon Y.  I think the pokemon was more of a focus than the swimming.  Kiyomi has best times in all of her races and wound up with two 5ths, one 6th and one 7th.  She was disappointed in some of her results as 3 tenths of a second would have meant a medal.  She did enjoy meeting the girls whose names she had been reading all summer.  She also knows what it feels like to make a final now.

Camping in Kamloops was a bit of a bust.  We didn't have any real time to enjoy Lac Le Jeune Provinicial Park.  We wanted to stay one more night and enjoy a day at the lake.  Unfortunately someone had reserved our site for Sunday night so we had to pack up.

We had a lovely evening with Mike and Barb Johnson and their kids Gavin and Branden (Brendon???).  The dinner was superb and the conversation (thought mostly centered around school stuff) was stimulating.  We also really really like their new house.  Lets hope we get back to Kamloops more often.

Amazingly just a week later we have another post.  Miraculous it you ask me.  So the dinner pictured below was a Mabo-Nasu.  Which is basically a ground beef and eggplant dish where it is all fried up with seasoning and Tofu.  I love it over rice but the middle child was impervious to its charms.  For a boy with such a healthy appetite he sure can be picky.  The salad had some cilantro and a home made vinaigrette. 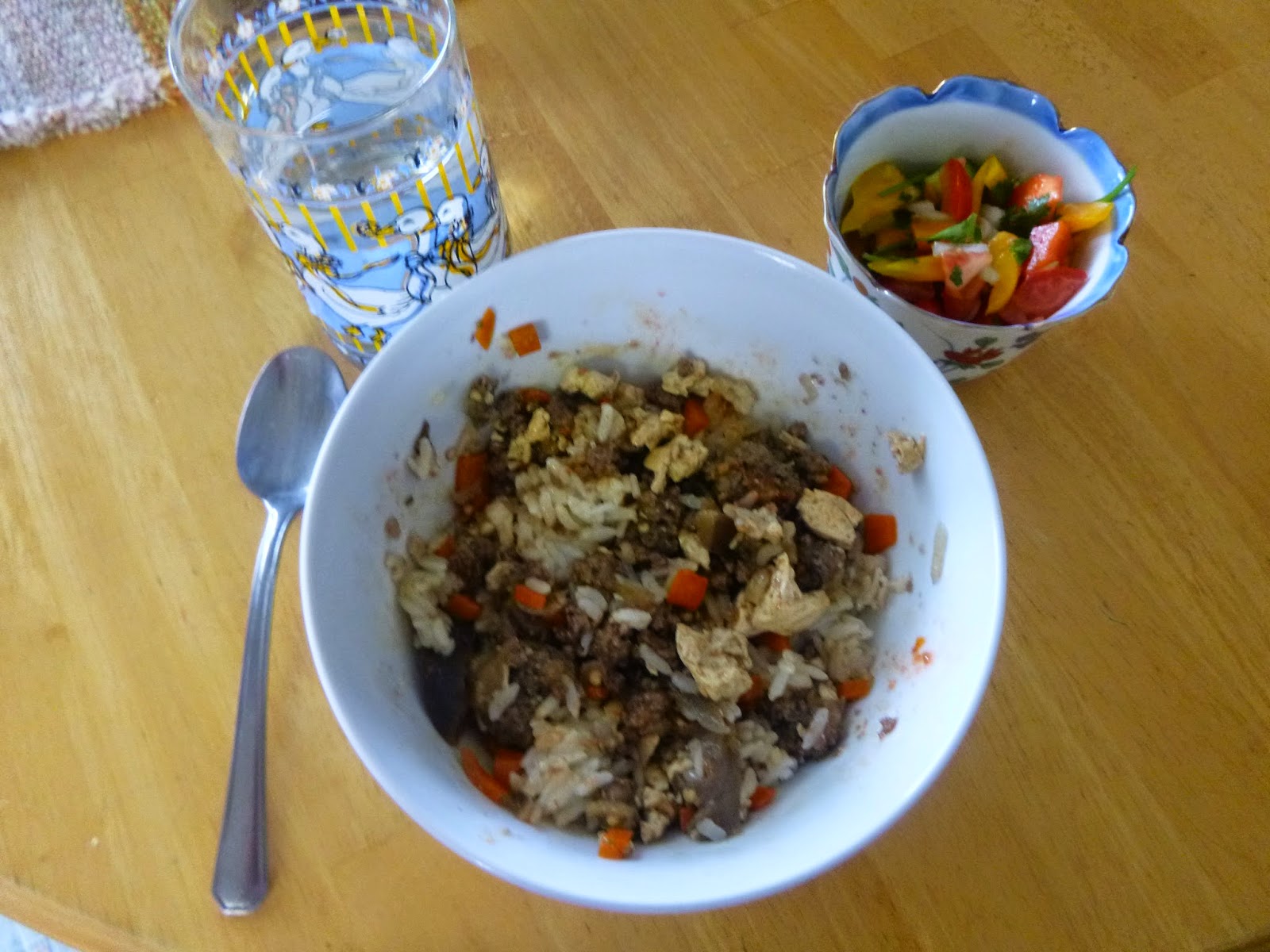 Bread production has increased recently as we are getting close to mastering baking without the cloche.  One evening while the oven was still warm we decided it was a pizza night.  We planned to use up the rest of the ground beef in bacon-cheeseburger pizzas.  However, after buying the bacon, cheese and other toppings when I got home I totally forgot to fry up the beef.  So it was bacon and pineapple for the kids with some mushrooms and onions tossed in for good luck. 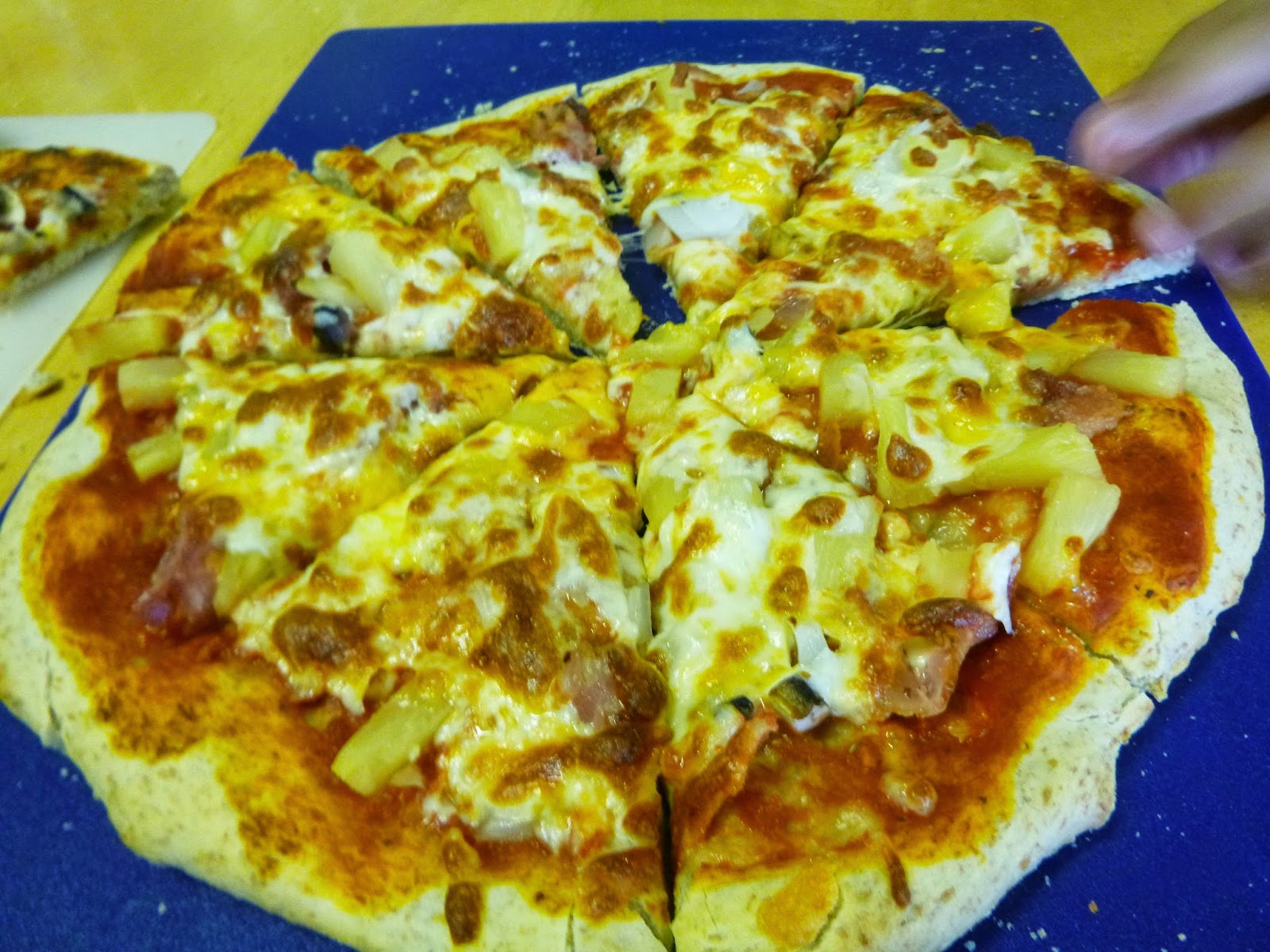 The masses were appreciative but not as hungry as usual.  Maybe it was the heat. 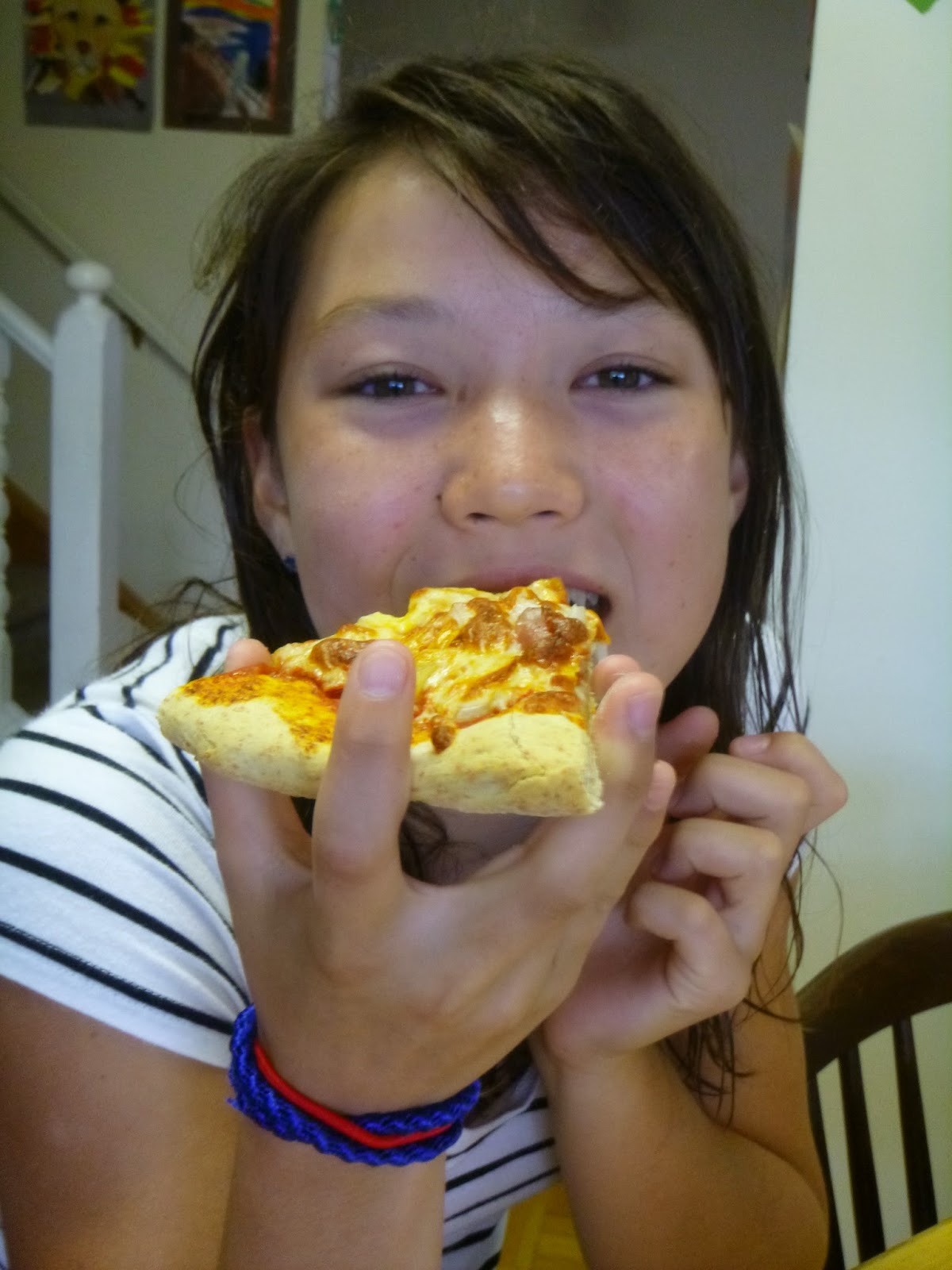 Then Friday morning we headed off for another weekend of swimming.  This weekend was in Kimberley.  We camped out back of the pool.  Lots of families with trailers as usual.  Last year there were at least 4 other families who followed suit in the tenting area.  This year we had the place to ourselves.  Feel really cheap but the 2 minute walk to warm ups made the decision seem like a good one.  We would love to have a trailer but that would mean a car upgrade and way more money in terms of gas.  So we will continue to tent until the day we have a miraculous windfall(note:  no one thinks this windfall will ever come). 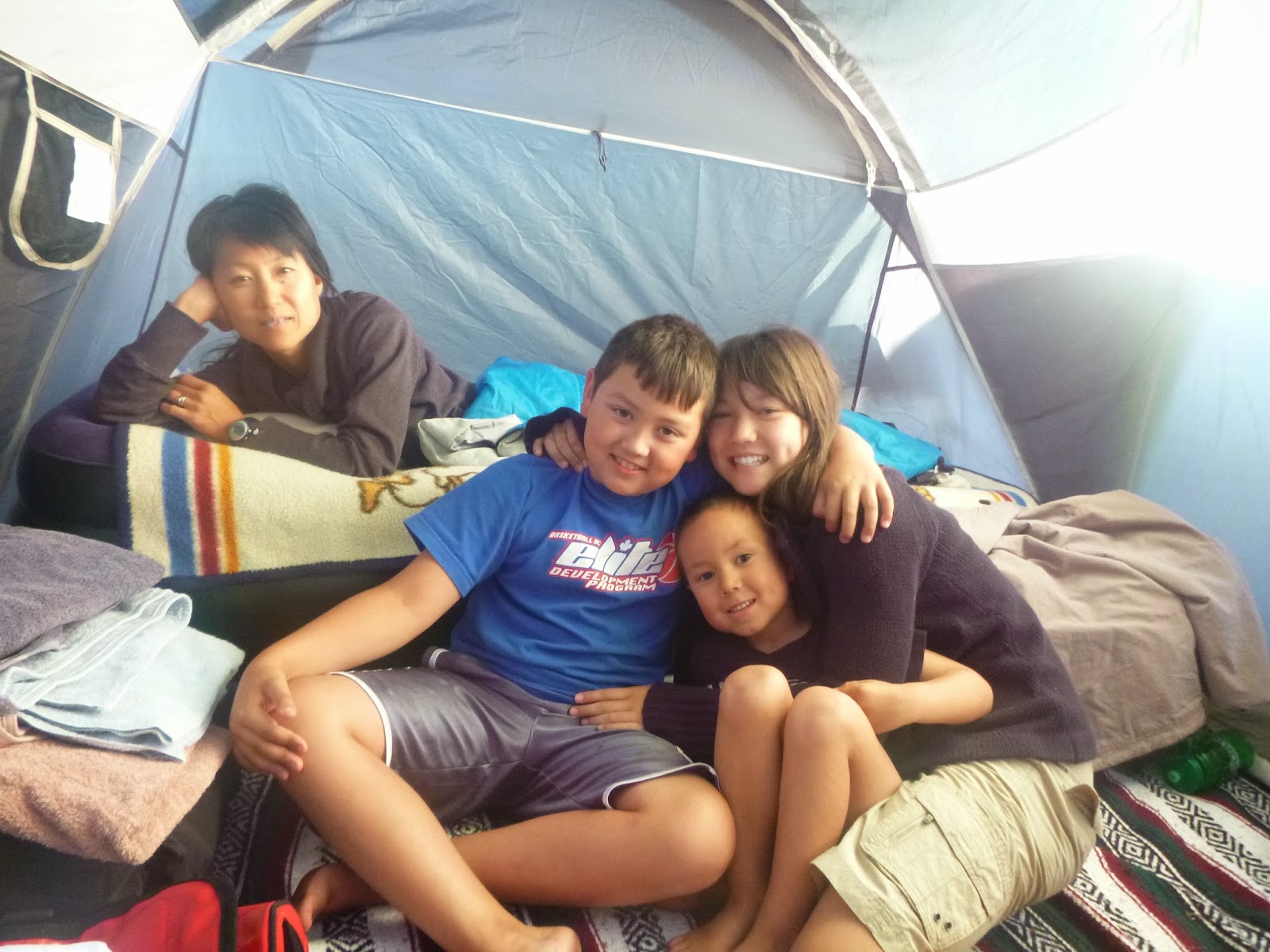 The swim meet had a pirate theme and by the morning of the second day the youngest had managed to talk someone out of their eye patch and toy blunderbuss.  I think its the dimples. 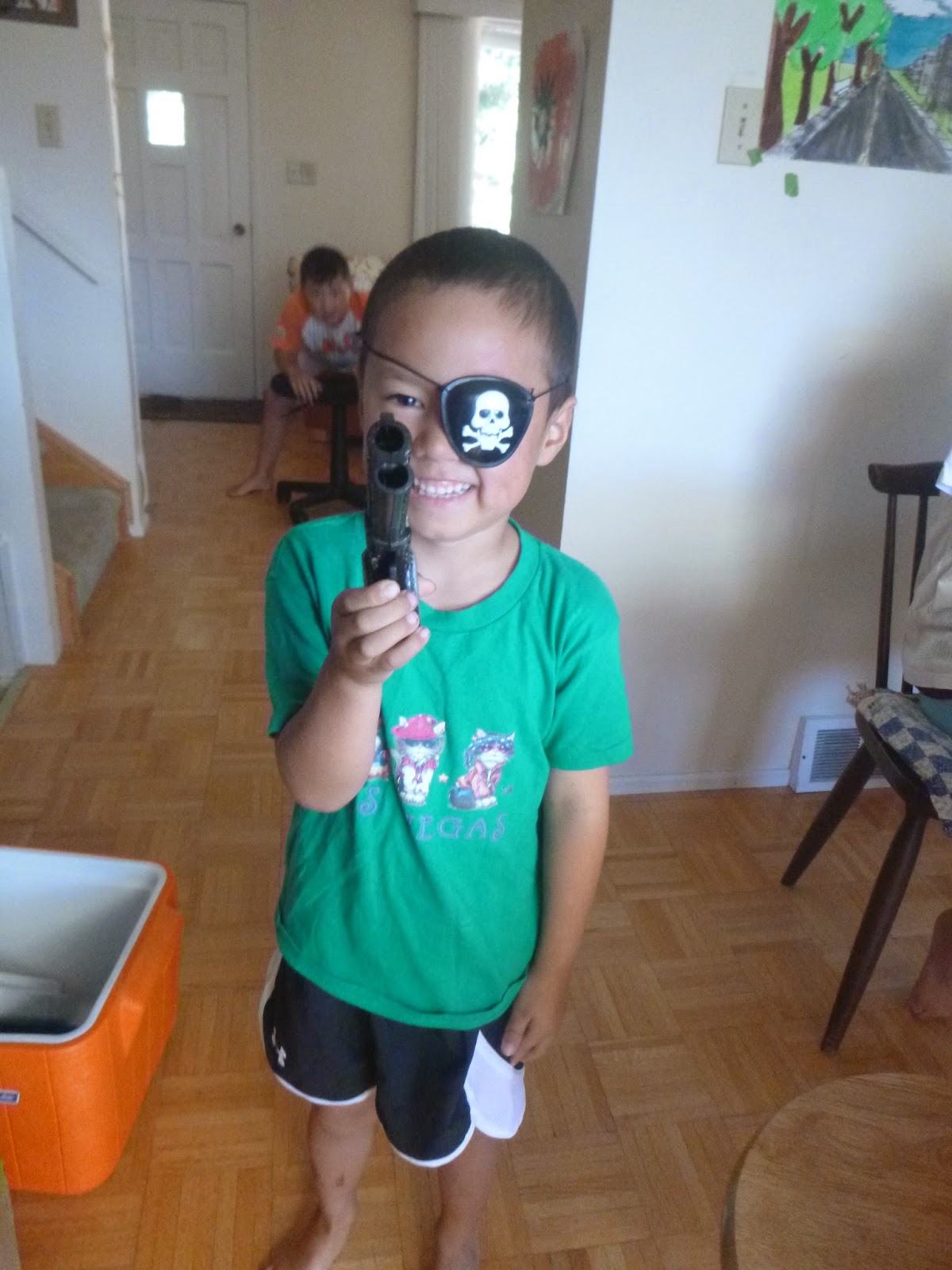 Both of the older two had good meets posting numerous personal bests.  The oldest managed to win her division. 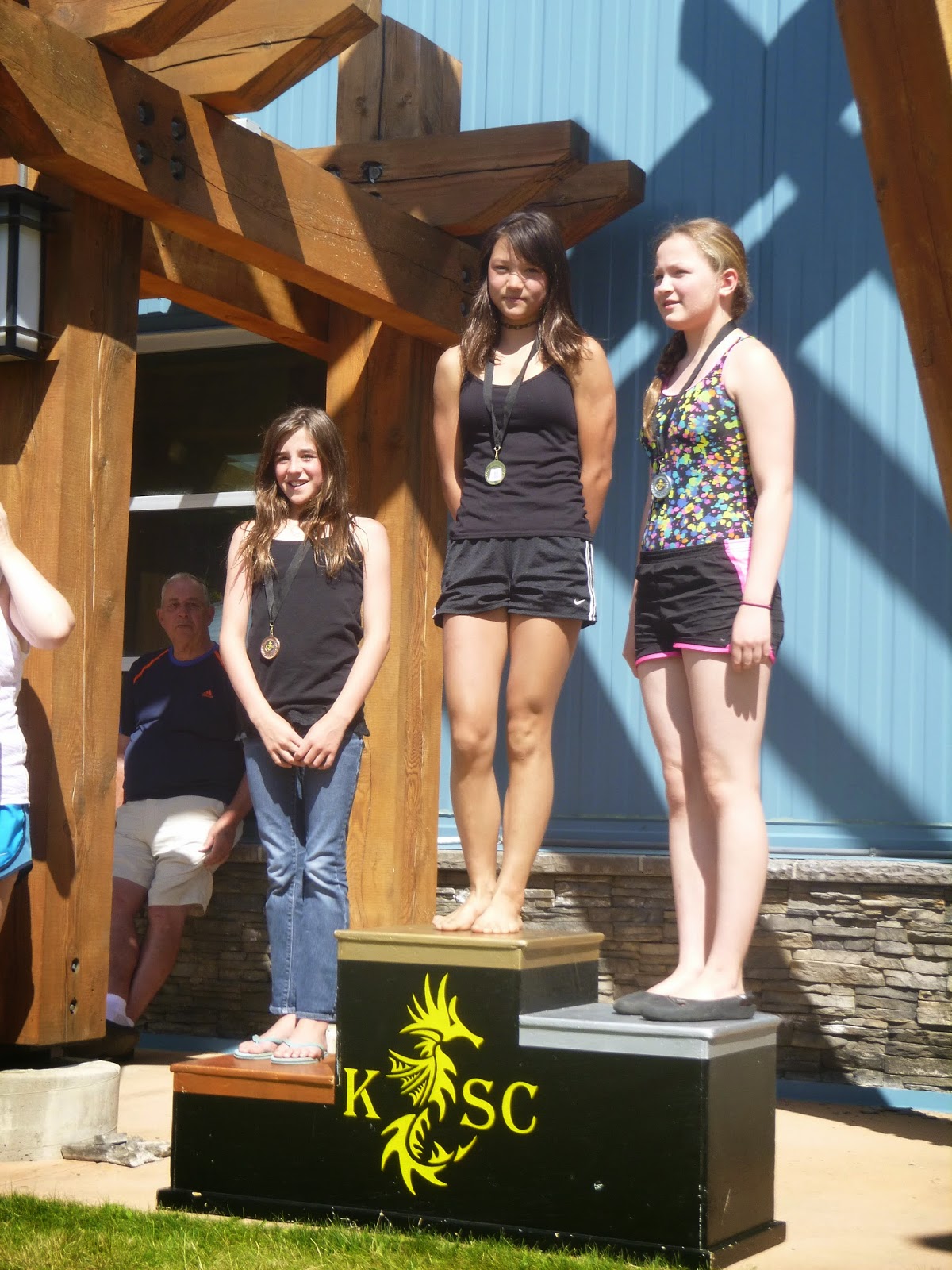 The middle child got disqualified in a race but still managed to tie for second place (the child he tied with left before the medal ceremony.  I think they were going fishing) 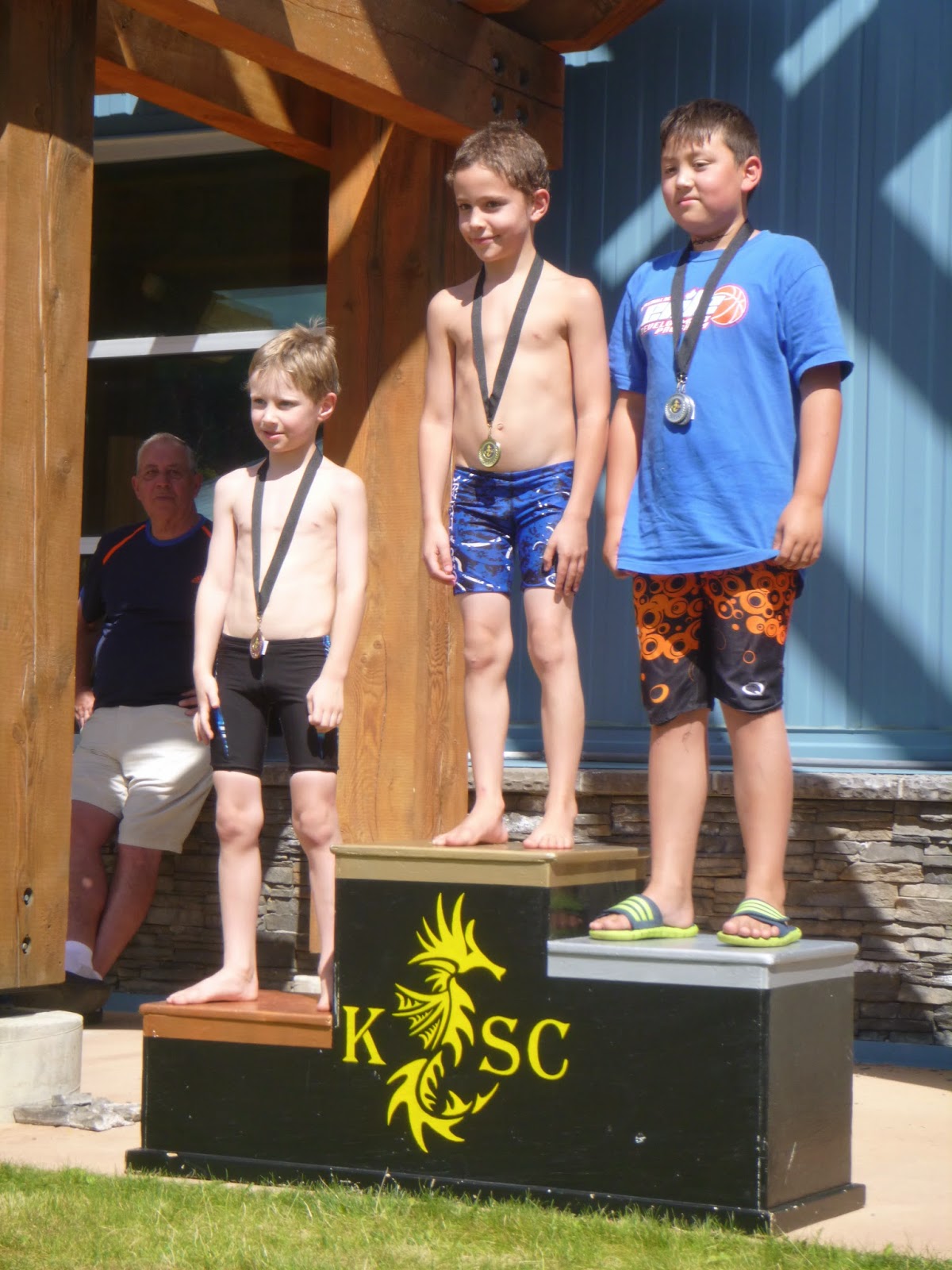 Regionals are next week and then in the middle of August we are off to Kamloops for Provincials.  At the half way point this is turning out to be a pretty great summer.  Still hot here (36C) and should be the same for most of the week.

So we were eating dinner two nights ago and decided wouldn't it be a cool idea if we took a picture of it and then wrote a blog about it.  So here it is. We had ribs recently when some guests were here and on Sunday evening we decided we would go for it again.  Slow cooked on the barbecue with baked potatoes and a slightly spicy curried vegetable stir fry.  Brilliant. 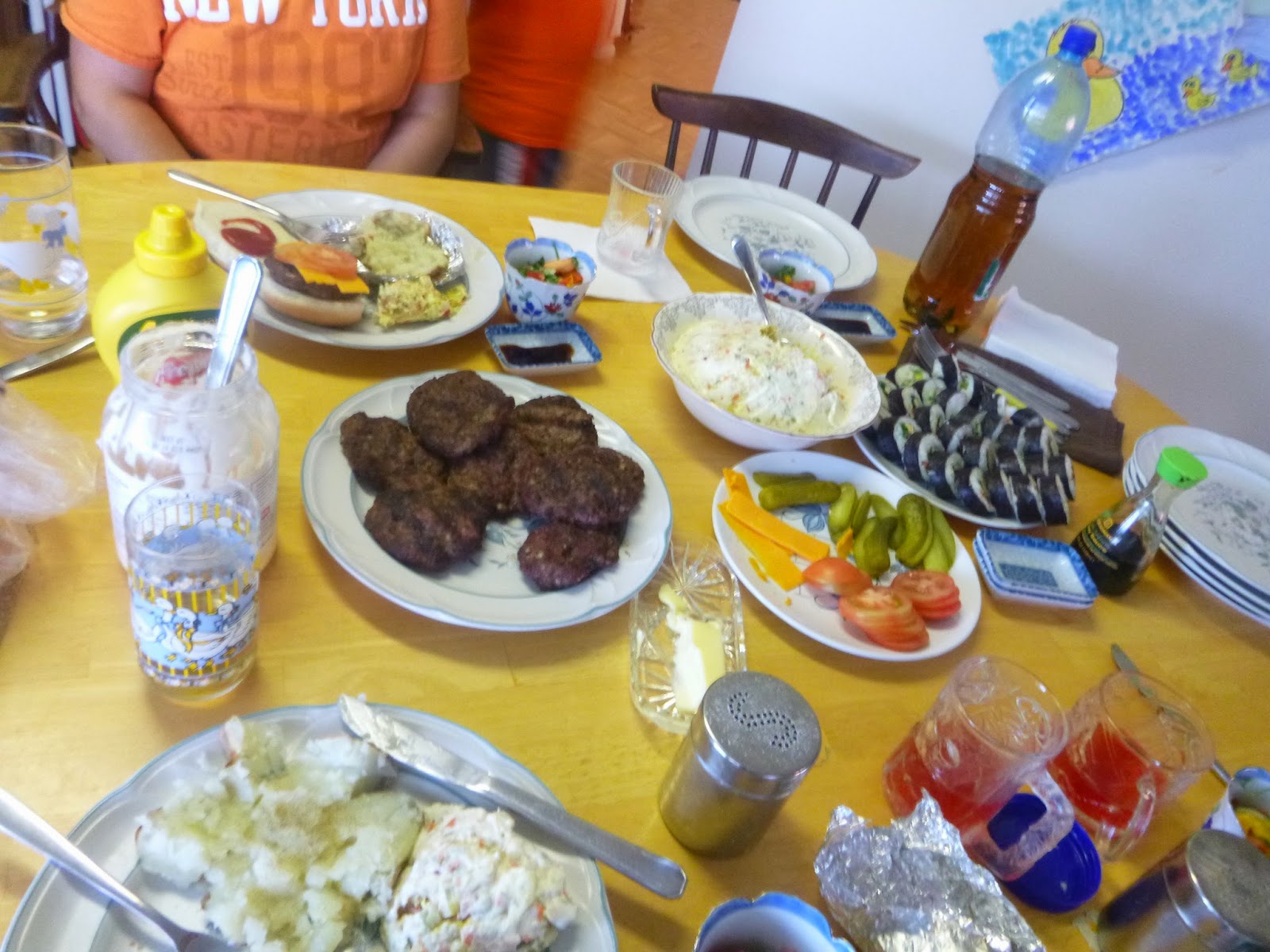 Then on Monday evening we had some friends over for burgers and sushi.  Not a classic mix but everyone enjoyed themselves.  Our friends brought a turkey potato salad which I am filling my sandwiches with today.  It was a really nice evening catching up and finding out about their trip to Europe.  Someday, someday.

Other major recent events include my mother making it legal with her live in lover 15 years into the whole thing.  It was a lovely day and I am glad to have been part of it. 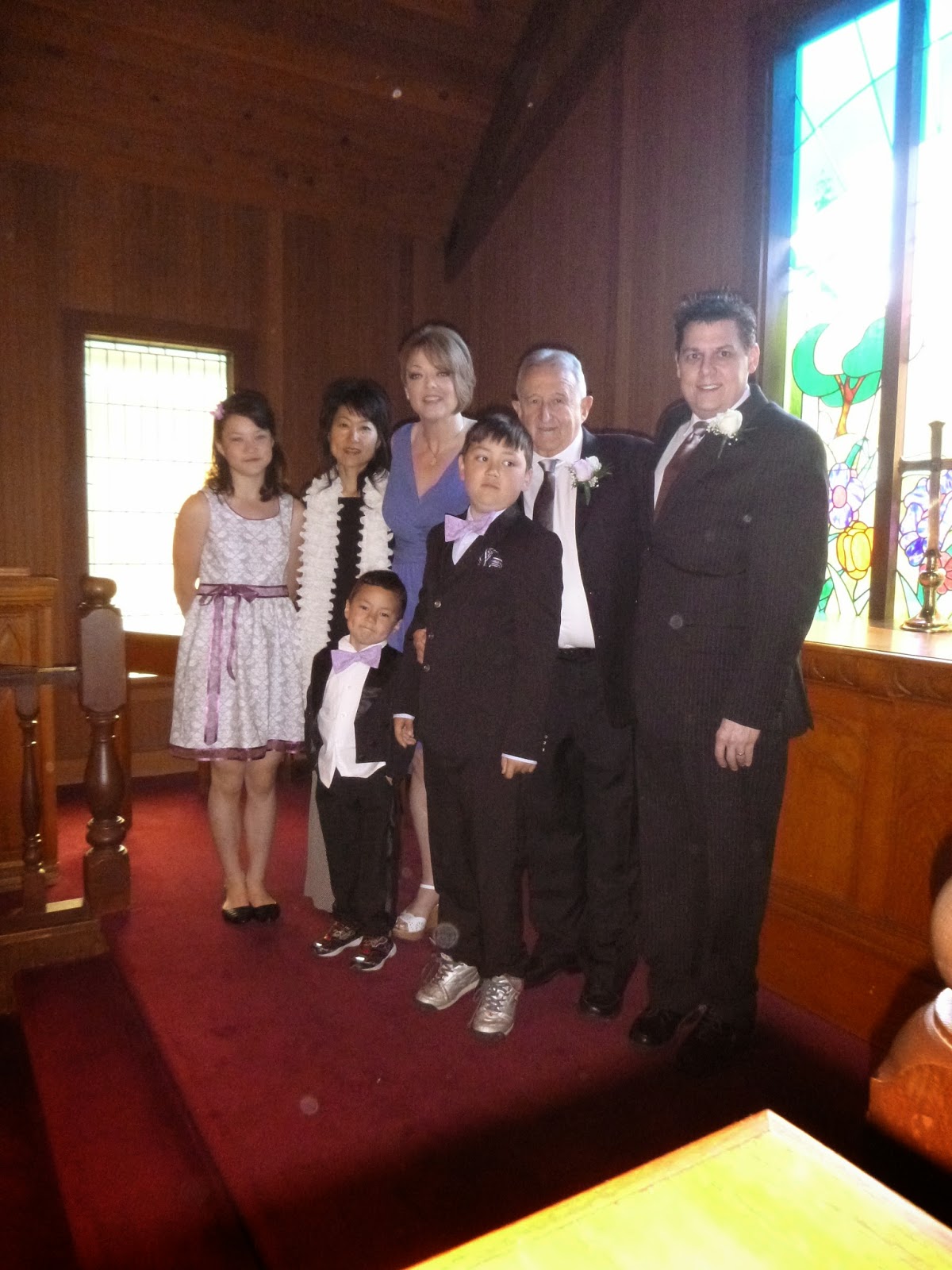 We also celebrated the life of Uncle Dave down in Oregon. 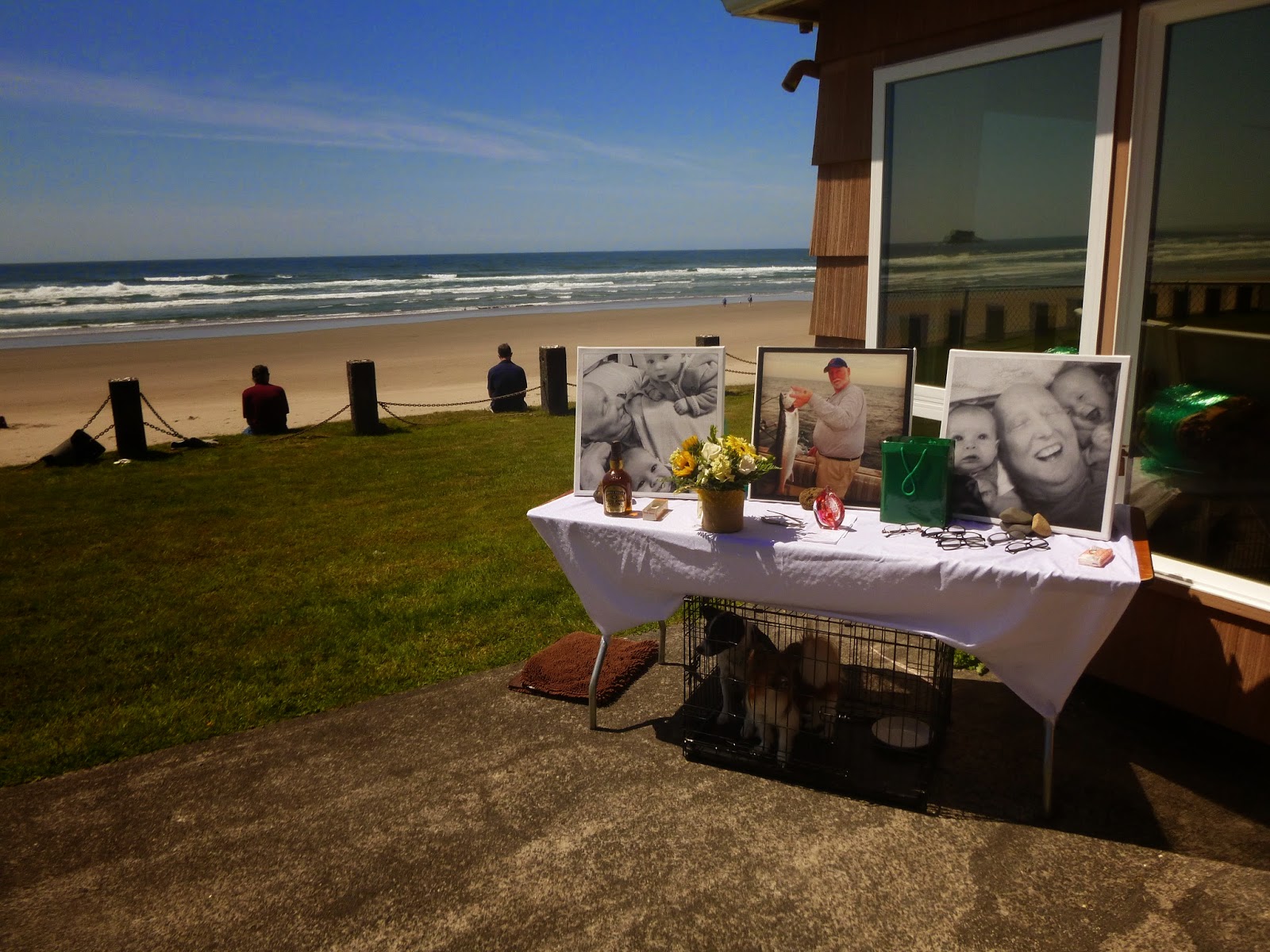 We had a great time getting together with family, sharing meals, going on extended golf/shopping trips and swimming the not quite boiling Pacific. It really was a magical 3 days and from now on whenever we want to be close to Uncle Dave all we need to do it head down to the Oregon Coast. 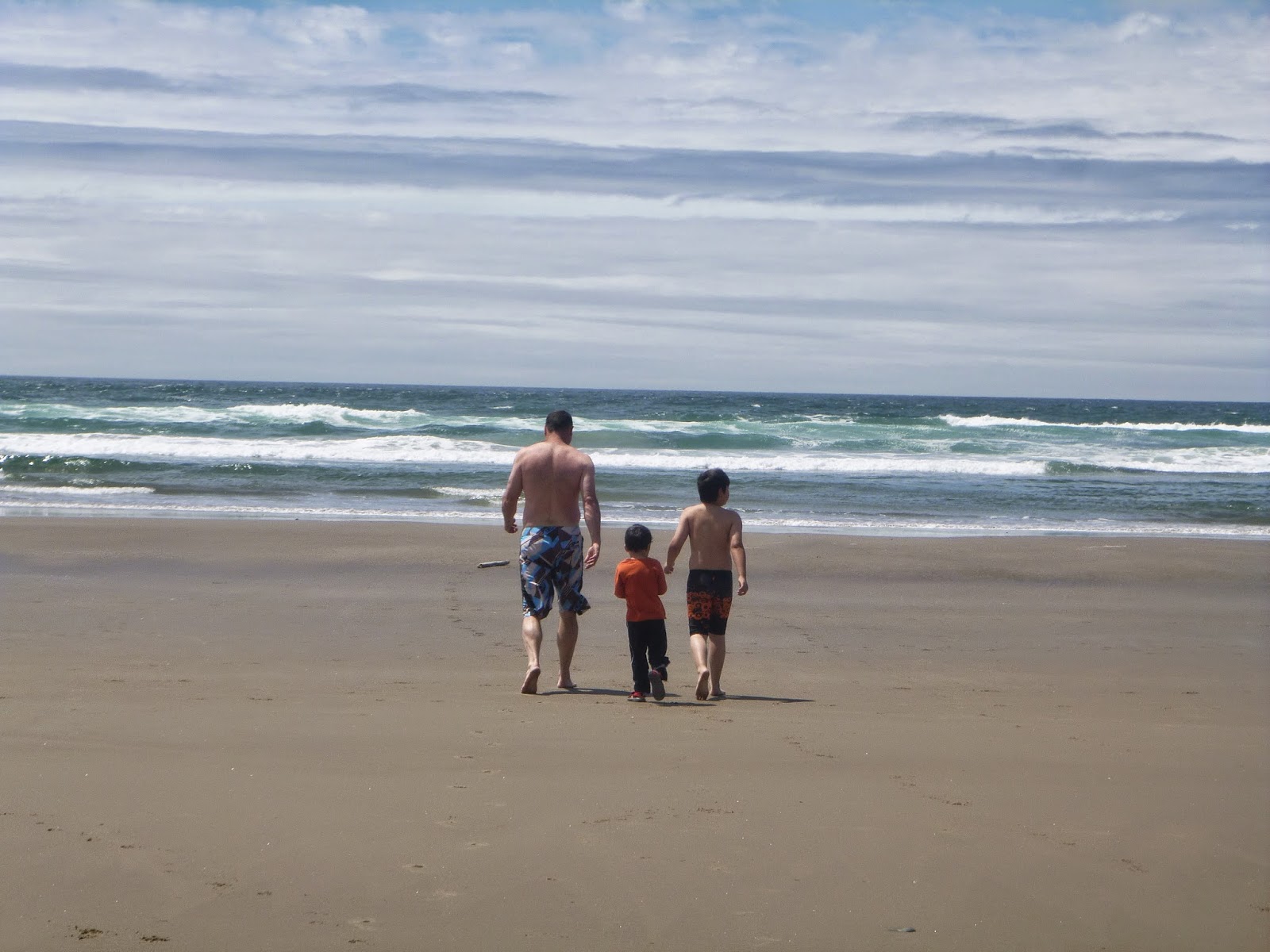 Love out, The Dunnets.
Posted by Fall Garlic at 5:03 PM No comments: