So there is a lack of pictorial evidence of todays events as we were both running.  But it was a good day.  The Mrs. and I were up at 5:45 with a plan to sneak out of the house by 6:30.  The Mother in law was going to drive us to the ferry terminal.  Nice plan.  Only all three of the kids were up by 6:00, dang it.  Fortunately the middle child put on a video which managed to get the youngest spell bound.  And we snuck out the back door.

Uneventful trip through town to the ferry.  We arrived on Sakurajima in plenty of time to check in, get our numbers on our shirts and our chips on our shoes and watch the opening ceremonies.  In Japan you always need to have the speeches before an event, the mayor, the head of the event committee, that sort of thing.  My ankle was feeling pretty tight after the warm up but it has been tight for the first three or four kilometers of every run recently so that wasn't a big deal.  A couple of trips to the washroom later and we were lined up and ready to start.  We lined up according to what finish time we figured we could make.  Apparently everyone else took half an hour off their probable finish time.  Our first two K were pretty slow as there was no moving through the wall of people in front of us.  Kilometers three through five had us slowly moving up.  That was when I got the wave ahead.  See in my mind I was leading us through the tangle of people so that we could get up to speed.  The Mrs. just saw me wanting to get going.  I kept turning around to find her and make sure we were together.  However, at the five K mark she just waved me on.  So I went.  I am not very good at participating without trying my best.  It is just who I am.  The bonus was that from that point forward because we had started so far back and made such poor time I was passing people all the rest of the way.  Which gave me a total boost.  I even managed to catch the two guys who over took me after kilometer 8, before we got to the end.  However, one guy did pass me with less than a kilometer to go and I didn't manage to track him down.  However, I did manage to finish just under 1:45.  Pretty darn happy with that.  My last couple of Ks were definitely under five minutes.  My last may have been sub four and half.  The Mrs. finished in 1:53 and change.  And looked pretty fresh to boot.  I on the other hand was gasping and had to have help removing the chip from my shoe. Well the volunteer offered and who was I not to accept.

Post race we ate our free meal, it was a standard bento and was more than satisfying. We also went for our free onsen.  However, with the rest of the 5000+ people going for their onsen it was less leisurely bath, more conveyor belt type factory style bathing.  I at least got to soak in the hot pool.  The ladies side was so crowded the Mrs, just had a shower and got out.  First time I have ever spent longer in an onsen than the Mrs.  After that we caught the ferry and then street car back to Kagoshima Central station.  We picked up some treats for all those stuck at home and caught the train back to Ijuin.  We didn't call and instead walked the four k home.  Gluttons for punishment.

All in all a great day.  It was kind of like a date, no kids, adult activity.  I don't know if I need to run 21.1 k ever again.  My left achilles is really bugging me now and I think it will be worse tomorrow.  But it was still fun to have done it and I think the Mrs. may found something she enjoys.

Oh yeah, when we got home the boys were napping and the daughter was still in her pajamas.  This is at 4:10.  Slow day at home. 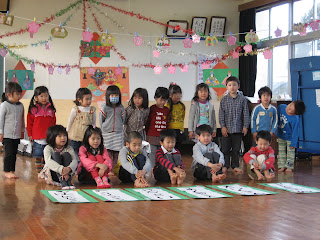 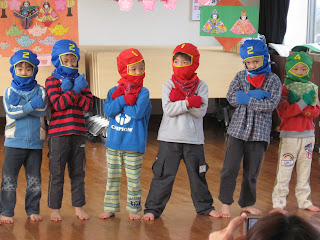 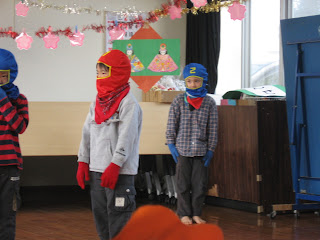 I stayed home with little miss, "my throat has a tickle and I don't want to go to school", and the super trooper.  It was a beautiful day day and me and the little guy got to the park to play with his new sand box toys. 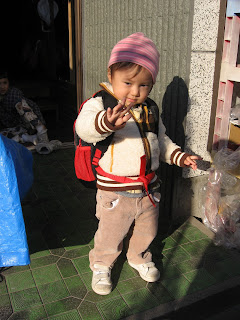 He can't wear the knapsack unless the belt is tied around the front.  Stylin in his o sagari mono (hand me downs).  We managed to get some good sand castle building after a nice run around after the soccer ball.  I am telling you this kid has a father with world cup aspirations.  The older boy came running up to the park after we had been there about forty minutes.  He got in on the sand castle building before a little grounders.
Posted by Fall Garlic at 2:27 AM No comments:

So we celebrated a little second birthday action here for our youngest today.  Scary that.  Our third child is now two.  Combine this with my mom being retirement age as of March and I guess that puts me and the Mrs right in Middle age.  Holey moley. 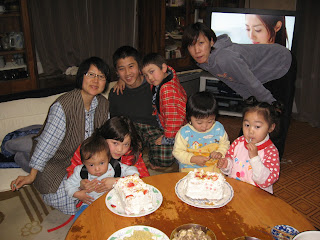 We had cake a la my Mrs. and everyone enjoyed it.  The cake was cut in two so that we could also get some candle action for my nephew whose birthday was a few weeks ago.  After two trys with the candles everyone was satisfied and we all got to dig in. 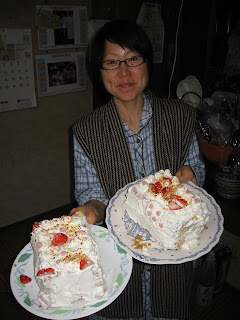 Below the son is modelling the backpack he got from his grandma. 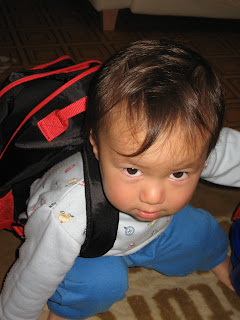 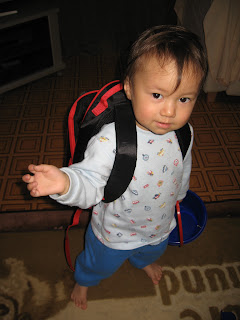 His aunt bought him so sandbox toys.  His mother made him a cake, his dad wrote this blog about it. I did also give him a great hug and this is me singing the loudest at his cake ceremony.
That is punk older brother stealing his cousins candle blowing thunder.  There was a do over and the little guy didn't seem to mind doing it up again the second time around.

In other recent news, well lets see.  In a personal accomplishment I broke through the one hundred barrier in a round of golf (96).  One of those things that seemed important until I managed to do it.  I wonder how many times I have to learn the "life is a journey, not a destination" lesson before it sinks in.  Fortunately, I have enjoyed the golf journey so far and hopefully will continue to enjoy it with my family as we wind our way through life.  I think I just need to be mindful of not worrying so much about the destination.  So other than that, there is the upcoming half marathon with the Mrs. next weekend.  Not super trained up but I told her today that if I had to stop at some point she should go on without me.  Will keep you posted.  The daughter is recovering nicely from a gash she gave herself a week ago.  Fairly deep but no stitches. The older boy just had his hair cut.  Previously I think he would have been best described as motley.  Now he definitely has a cute vibe.  I am itching to get my hands on the littlest's locks but we probably have to wait for warmer weather.  Other than that we have made two batches of salsa recently, which totally reminds me of me.  (inside joke, sort of)  Starting to feel like we are winding things down here.  Less than a month till mom arrives.  The daughter brought home the note with the schedule for the last days of school.  (the school year ends in March and then starts again in April).  So yeah spring is in the air and I am loving it.