This Week in Sports

So I ran ten k today, almost. Apparently there will be a lap around the track when I actually do the race.  Three freakin hills on the route.  One of which is more than a kilometer in length.  I don't think this is the kind of course I will be breaking forty minutes on.  Today, working pretty hard, it took me 51 with out the extra lap so that would put me at 53 for the actual ten k.  Now I do have about three months till the actual race and I really have just started back but holy shnikkees.  To grind 13 minutes off of what I did today.  It just seems totally unreasonable.  I need to find a flat course race some time in March.  Or possibly something back in Canada come june or july.  The good news is that this is the second day in a row of running and I did an hour of yoga this morning.

In other news the box arrived.  We ordered a bunch of stuff from the foreign buyers club here in Japan and it arrived yesterday.  So today we are having nachos and salsa with the doritas, jalapenos, olives and brick of cheddar that came in the mail.  We have to wait until Sachon and Kiyomi come back from checking out Piano lessons.  I think I can I think I can.  The salsa turned out pretty well and sachon made the guacamole so I am sure it is tasty.  I just need to find a grater for the cheese.  Damn the things you take for granted. If I manage to get a picture took before the ravenous ranks descend upon the food I will up load it.  No promises.

And then there was one.  With the start of all day (9:00 - 2:00) kindergarten for Kohei this week we are officially down to one kid on school days.  Yesterday the Mrs and I went shopping for running shoes and even though we took the little tyke it wasn't so bad.  Between the two of us we managed to keep him occupied and try on shoes.  Happy day.

It turns out I really need the shoes as I seem to be gaining ground in the old mass department.  Apparently massive amounts of free time without the need to look for work or do much of anything else is not the healthiest life style.  Who knew?  Fortunately the kids routine is pretty set so I can try and build exercise and purpose into my life around this.  It should work.  Guitar lessons are still a possibility.  I was thinking about a gym pass this morning.  I also may take it upon myself to prepare a dish every night for dinner.  I made a really nice Thai Curry last night basically from scratch.  People enjoyed it.  I enjoyed it a little too much.  I am pretty sure that is the other side of the fitness equation.  Portion control.  Basically when I am not exerting much energy every day there is very little need for the 2000+ calories I am used to. Not that I plan to start counting but I just have to leave the seconds and after dinner snacks out of the equation.  Basically I need to drop about 20.  Then I will be at a good weight for next springs running season.

In other news the youngest was mauled by a dog.  Well, okay, he was bit on the right side of his mouth by the little shitzu we live with.  He cried a bit but had finished with the water works before Kiyomi, who was practically hysterical after seeing it happen.  He is doing fine here two days later and seems to be healing well.  Here is a picture from the day after.  The one on the right is from just now. 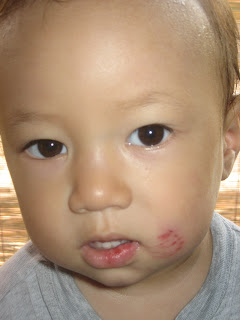 One more reason I don't like yappy little lap dogs.  In the second picture the little tough guy is holding the bat I bought yesterday.  At the sporting goods store I decided to get a bat and ball to play with at the park.  Kohei seemed to enjoy trying it the other day at Kindergarten so I thought what the heck.  Well was that ever a stroke of genius.  Last night before dinner we went to the park to try it out.  Total success.  Two other neighbourhood kids and a mom joined in our make shift game and we played baseball for about 45 minutes straight.  Both kids were whacking the heck out of the ball and even though they didn't seem to get all the rules and the bases were hard to find as they were just scratched in the dirt it was a blast and no one wanted to go home for dinner. 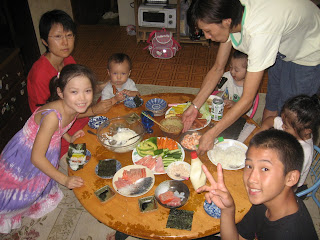 Finally this is a picture from dinner a few nights back.  Te maki sushi.  Good stuff. Hope everyone's well.  And thank goodness you guys are all blogging like mad.

Signing off from Glass House Central.

Love out.
Posted by Fall Garlic at 4:24 PM No comments: