So as the summer winds down it seems like things speed up.  We have been pretty busy over the last week and a bit and from here on out things get even crazier.  But lets recap.  To start with we had our Friend Tomoka over for dinner.  She and the Mrs. mixed it up with the karaoke set we brought back from Japan. Apparently there are plans for a rematch. 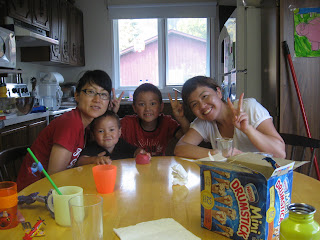 A few days after that we got up real early in the morning and went for a day of boat camping with some friends.  They set up at one of the water entry camp sites on Christina Lake every summer for an extended camp trip.  We went out and joined them for the day. 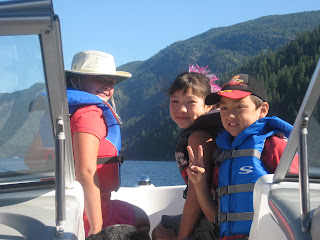 We brought the fishing rods and caught a whole bunch of fish.  We also went tubing and tried out wake boarding.  The daughter got up for about 100m and I managed to drag my body out of the water for a short but memorable stint.  It  was definitely challenging.  We need to plan to get back there in the future as camping on the edge of the lake was truly heaven.  Maybe next year. 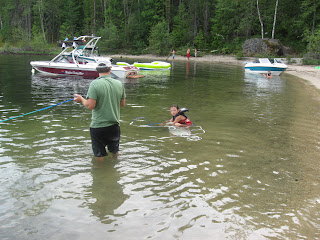 The reason we didn't stay over night is that we had friends arriving the next day.  Blair and Kat spent the weekend here and we went tubing twice.  It was great.  As Blair said, "Why haven't you been doing this everyday for the last eight years?" I had no reasonable reply.  Tubing is awesome.  Unfortunately I am still waiting on pictures because our guests had the waterproof indestructible camera.  When I see them then you will get a chance too. 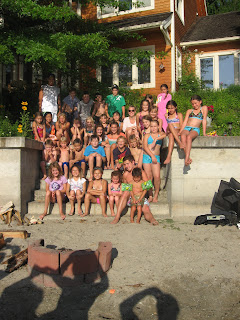 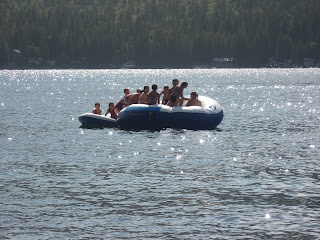 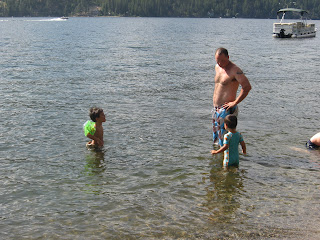 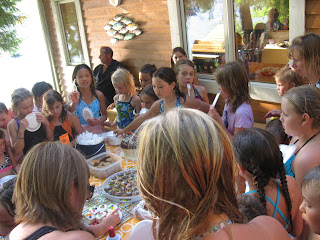 And then they had the awards ceremony. It seems like everyone got something.  The older boy got a prize for being a speedy novice. 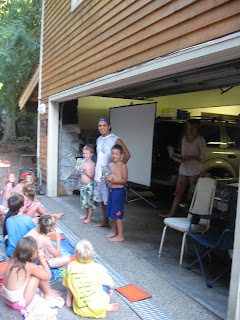 The oldest got was a joint winner of the Forks award.  For the swimmers who embody the blah blah blah... she gets her name on the plaque.  We were very proud. 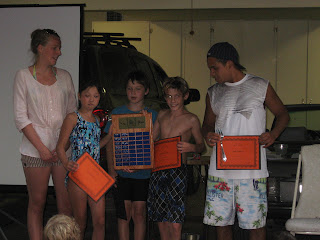 Finally I finished the book shelf downstairs.  I finished it two days ago but the Mrs. took one look and gave me the disappointed face.  I had not made what she was envisioning.  This was during the great computer virus struggle of 2012.  Never the less I took it mostly apart.  Made some pieces smaller, added other pieces, moved some pieces around.  And this is what we ended up with.  The Mrs. at least gave me the appearance of being pleased.  Which is all I can ask for. 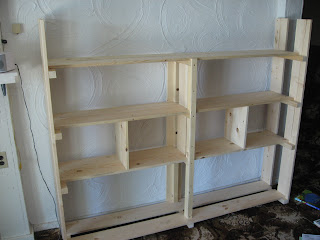 Yes, summer keeps rolling along.  Hope you are all lovin it.

Peace out.
Posted by Fall Garlic at 12:50 PM No comments:

So among other things we went to Christina Lake today.  This followed a morning at the park.  The kids tried the BMX track and we threw the frisbee.  They also played in the river for a bit.  Then after lunch we went to the lake.  The middle boy and I took his new rod to the river and fished for the first time.  We were skunked but still had a good time.  Then we met up with the rest of the crew at the beach and had a lovely afternoon.  We came home and made store bought pizza and barbecue chicken drum sticks.  Didn't even think to take a picture.  Gotta get back in the habit. 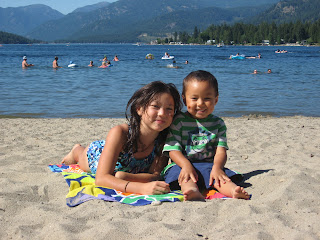 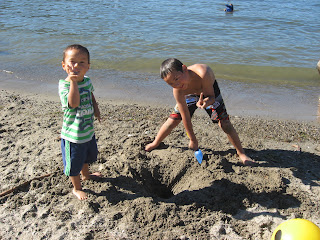 Good first day of the long weekend.
Posted by Fall Garlic at 8:31 PM No comments:

Things I have Made

So lets start with dinner.  The burgers were prepared and cooked by yours truly.  I didn't actually grow the zucchini but I will definitely get on that next year.  Or the year after.  We have done a lot of barbecuing this summer and I think my technique has finally turned the corner.  I have stopped putting barbecue sauce on right at the beginning.  And surprise surprise, I am burning less stuff. 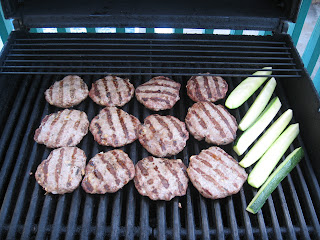 This next little poster thingy was completed two days ago.  Notice the stickers only go up to 8.  The youngest gets to put one sticker on for a pee and two for a pooh.  A blue number means he gets a candy and a red number means he gets a toy for the little stash of dollar toys I bought. You might also notice that there is room at the bottom of the poster to go beyond 200.  I am hoping that two weeks will have him completely trained but you just never know. 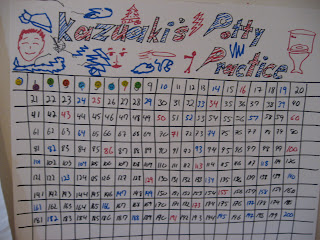 Next up is the glorious first raised bed.  It was a four day project (not full days) and it still needs about 2 cubic yards of manure/top soil to fill it but the bones are there.  And I am very happy.  16' x 4'.  Should hold my whole garlic crop for next year quite nicely.  Also I am going to work on a little green house type cover so that we can get the early season growing going a little faster. 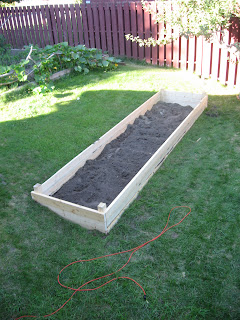 Now I didn't create the deer posing in the background but this is what the garden we planted this year looks like.  You can see the squash in the picture above.  Here you can see the carrot tops, broccolli, tomatoes and peppers.  We have already harvest all of the potatoes, garlic, spinach and lettuce.  There is a little patch of chives and a growing set of straweberries that cannot be seen in either picture.  Gotta love summer. 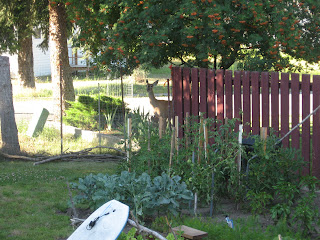 Posted by Fall Garlic at 9:47 AM No comments: 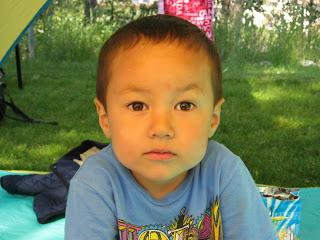 This picture was taken in the sun tent in Kimberley.  It was a great swim meet and when the kids went to practice on Monday the daughter found out that she was swimmer of the meet.  Seeing as she had a best time in all six of her individual races and her relay team won both of their races I can see why.

So swimming meets are now done for us.  The regional meet is this weekend but the boy isn't in a division where he can race and the daughter has finished no higher than 5th so we are giving it a miss this year.  She might have made it in Butterfly because she is improving by leaps and bounds but we will worry about regionals next year or the year after.  For now we are just happy that the kids are enjoying swimming and the family is enjoying the meets.

So two nights ago the Mrs. reminds me to take a picture of our dinner for posterity. 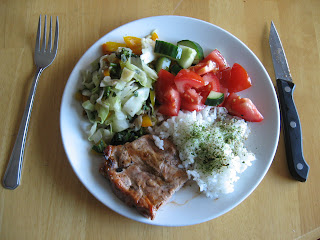 I barbecued some pork chops, the Mrs. made a veggie stir fry and a tomato and cucumber salad and we put some furikake on our rice.  Colourful and delicious. 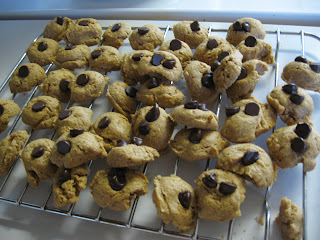 In other news I made another shopping faux pas.  This was when we were down in the States a few weeks ago.  I am buying peanut butter and I know how fussy the Mrs. is about her sandwich spreads so I make double sure and by the one that says "All Natural."  Little pat on the back as I take it up to the register for being so responsible.  Of course once I get back to the camp site and my wife takes out the Peanut Butter I realise I did not make the grade.  Third ingrediant on the back is sugar.  We don't buy Peanut Butter with added sugar.  So this is all in support of the above picture where the Mrs. has made peanut butter cookies that would have had sugar in them anyways.  Gotta use it up. 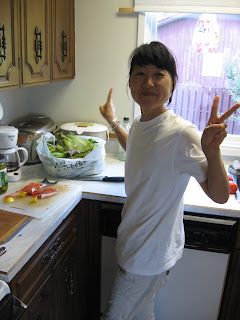 This is my lovely better half as we were making dinner this evening.  She de boned the salmon and I did the barbecue honours.  Home grown garlic(crushed) lemon slices, salt, pepper and a little olive oil.  Very tasty. I also baked up some potatoes as well. 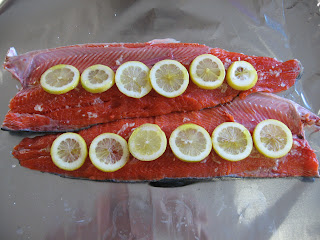 While I was 'cueing the Mrs. was inside making another lovely version of her chunky vegetable salad (some red pepper thrown into the mix today) and boiling some corn. The natives seemed to be satisfied.  Not much fish left. 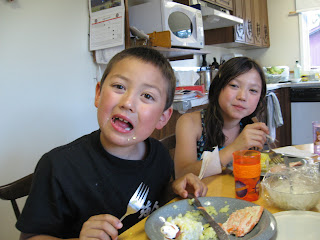 I am in the process of building the first of a series of raised beds for the vegetable garden for next year.  Pictures should be forthcoming soon (if I remember to take any).

Love out.
Posted by Fall Garlic at 9:08 PM No comments: