Vistors from a Near. 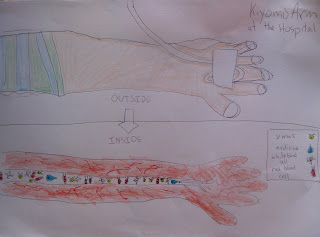 So we start off with a picture the kid made of her arm with the ten teki(iv).  This was early on when she was really afraid each time she got poked.  It got better as time went along.  The final results came back today and her numbers are good.  She can go to school on Monday.  Thank goodness. 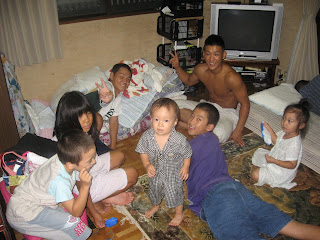 In other news the relatives from Yokohama were down for a couple of days.  These are Junko's younger brother and his family.  So Sayoko's youngest cousin is about five years older than her oldest nephew.  They are in the back of the picture at the top.  This next set of pictures is Kohei, Kazuaki and myself hanging with them one evening.  It was raucous. 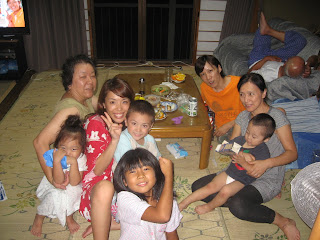 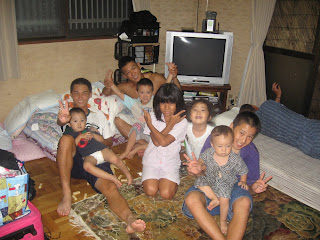 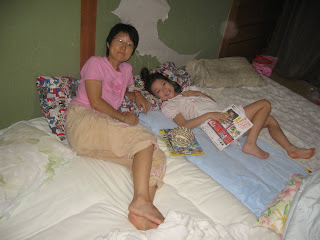 Our final picture of little miss Sicky with her mom.  This was yesterday so she was still officially sick and couldn't play inside.  Life was tough.
I meant to take some pictures of my pizza from last night.  I am resigned to having crappy crust while I am here.  Just no option for getting the hot base before transferring the pizza onto it.  However, the crowd is eating it up so I shouldn't complain.
This weekend coming up is the neighbourhood sports day.  I think I have been entered in numerous events.  Lets hope the body holds up.
Love.  Out.
Posted by Fall Garlic at 7:26 PM No comments:

Well the current hope is that Saturday will be Kiyomi's last day in hospital.  Her liver something or other numbers are coming down and the hope is that by Saturday they will be close enough to normal that she can come home and start acting like herself again.  Fingers are crossed.  The little trooper is pretty sick of being in hospital.  We are keeping ourselves pretty busy during the day but it isn't the same as being at home and playing with your siblings and cousins.  Asides from the video that can be found here,

we also studied some Japanese today and read most of "the BFG" by Roald Dahl.  Fortunately the third book of the Harry Potter series arrived in perfect hardcover condition from Amazon Marketplace Japan two days earlier then the earliest expected date.  So for $5 including shipping we are starting on the Prisoner of Azkahban tomorrow.  Man do I love the internet.  Sorry about the lack of pictures.  However, I think the video out put should more then keep you satisfied.

Did anyone else notice that I have started using our names in the blog.  Yes all dreams of making this a commercial venture died within the first couple of months.  So the silly habit just had to follow.

Hope you're all well and Congratulations Joey.  Your rock.
Posted by Fall Garlic at 4:19 AM No comments:

So my full time job is turning out to be kind of fun.  I am up to chapter 9 in the second harry potter book.  We are working on a little stop motion animation project.  And a clown came to visit the childrens ward today so we even got a magic show and a balloon bear.  The fever is subsiding and the doctor seems pretty excited about the prospect of her betterness come tomorrows blood test.  Much like Kohei three years ago she is just having a worse than usual reaction to contracting the epstein-barr virus.  I have also made my apologies to the Mrs.  sheepishly.  Kaz is looking for some attention.  Gotta go.
Posted by Fall Garlic at 3:53 AM 1 comment:

I lost the battle of wills and Kiyomi has been admitted to hospital.  She will be getting essentially the same treatment she would be getting at home.  Only now one of her parents has to be at the hospital 24 hours a day.  If I am not mistaken (which I may very well be) then Kiyomi will recover from her infectious mononucleosis within the next two weeks.  My guess would be that it would have been about the same amount of time were she to have stayed home.  We will never know.  Time to put the boys to bed. On a positive note, I will not be nursing Kaz so his days as a baby may be drawing to a close.  On the other hand it may be a long night.
Posted by Fall Garlic at 4:57 AM 4 comments:

Well one thing is for certain.  This kid is a fighter. 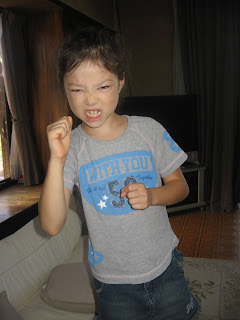 Or she may die. 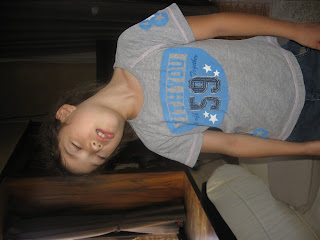 You just never can tell.  The doctors are saying it is probably infectious mononucleosis.  Which means we have at least a few more weeks until she is into going out and about shape.  However, it isn't the end of the world.  Sayoko is going to take her to the local children's hospital to check her liver and spleen.  It at least sounds plausible.

In other news the boys were hanging out in their baskets last night. 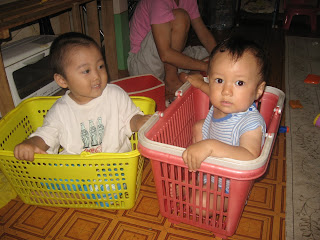 It was so cute with the little ones that big brother had to get in on the action. 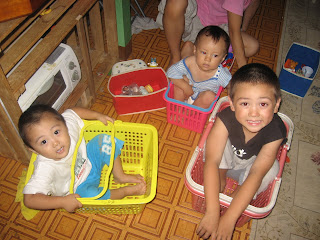 This last one is Kiyomi trying to follow the conversation between her mother and Aunt.  I had given up a long time previous so I thought her valiant for battling on. 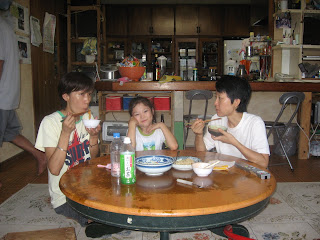 Currently I am boiling beans for tonight's chili.  Once again I will make a spicy and a not so spicy.  Hopefully I bought enough tomatoes so that it is much saucier than last time.  Still working on portion size to feed 11.

Can you see it. 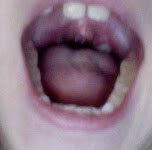 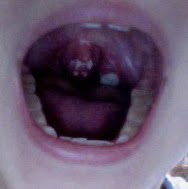 The white thing in the back right of Kiyomi's mouth is what I believe to be a very swollen and infected Tonsil.  We will be off to the doctor tomorrow.  Pictures taken with the laptop.  Just couldn't get any focus with our digital.

Update:  The third picture is new as of Monday our time.  We are off to the doctor's some time today.
Posted by Fall Garlic at 12:34 AM No comments:

Here is what you've missed.

So it has been just over a month since I touched down in the land of the humidity blues.  I arrived to find the daughter still in school and everyone else getting used to the heat.  Some outstanding events so far.  We had a dinner party in Ijuin with Sushi and such. 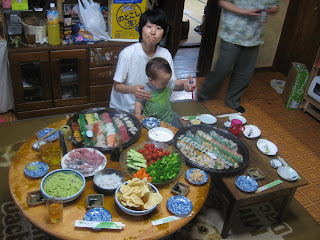 I believe it was actually a birthday party for the daughter and yours truly.  Good times.  This is a picture of the littlest one modelling the latest in bug catching fashion. 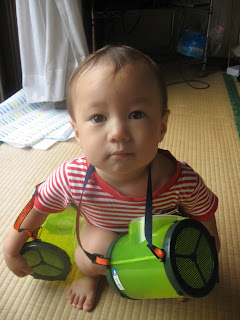 We have caught cicadas, butterflies, dragon flies and some kind of stinky bug.  Good times.  Most of the time we stick around here at home and just hang out.  The kids do lots of playing and fighting.  Good times. From oldest to youngest we have Atomu, Kiyomi, Kohei, Lilo, Tsubasa, and Kazuaki.  Sometimes Nanamu comes to stay over and she becomes the second eldest. 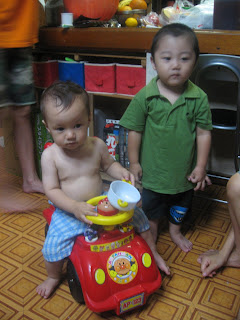 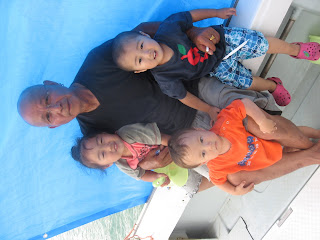 So one day it was hot and we went down to the marina and swam off the back of Yoshiteru's boat.  We tried to do it the next day but it was low tide and harbour was pretty yucky.  So we took the boat out for a spin and swam in the open ocean.  It was pretty fun even if I did get a good sunburn. 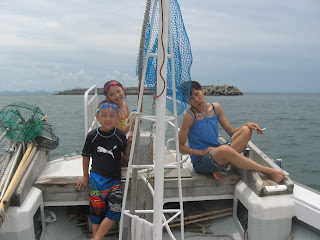 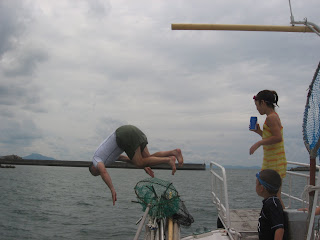 I am in the middle of a beautiful swam dive here.  Really it should have been video.  Next time, next time. 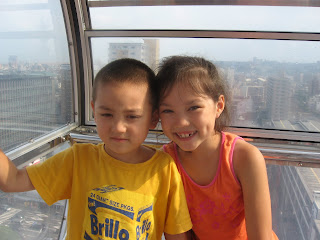 Another big outing was taking the kids on the giant Ferris Wheel at Kagoshima Central station.  It was a prize for Kiyomi.  She managed to read five pages of a book in less than half an hour.  That is a Japanese book.  She has come a long way.  I am hoping that her anxiety will be way down when she goes back in September.  One step at a time.

We also went for a visit to the Kindergarten Kohei will be attending.  They had a little summer festival and we went and enjoyed cold stream noodles, sno cones and fireworks.  The teacher was pretty worried about Kohei joining in September but after the festival it seemed like a lot of his fears had been allayed.

I am still not working although I am starting to sniff around at some offers.  It is such a blessing to finally be back in the blog hunt.  The reason I am finally blogging is that I bought a new USB cable so I can download pictures.  Still lots to think about and lots to do but more and more life is starting to flow.

So I am blogging from home after having a quick skype session early today with two of my sisters.  It is definitely game on.  More to come this evening (or morning where you are)
Posted by Fall Garlic at 1:06 AM 1 comment: