Dancing in the Living Room.

That is what is happening while I type this.  We have "I've got a feeling." pounding out from Youtube.  The kids are ripping it up while I lay this down.  Mazeltoff!! 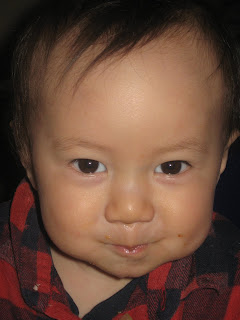 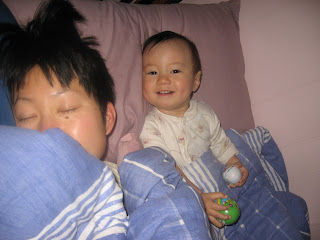 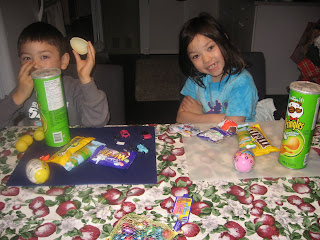 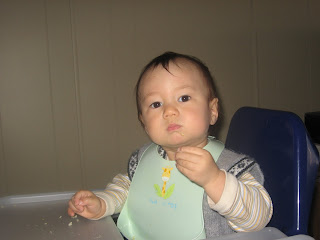 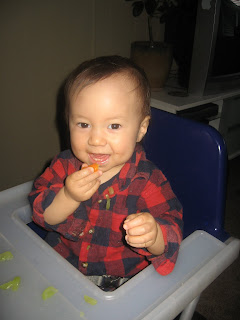 So that is what have we been up.  The youngest is spending quality time being insanely cute and demanding his thrice daily feed.  It is nice to have him gobbling up the solid food.  Always progressing towards being a big boy. The kids enjoyed the Easter chocolate on Easter and well into the next week.  As usual the boy managed to make his last longer and rubbed it in his sisters face.

Lets talk about dinner this evening for a second.  We had burritos which isn't particularly interesting.  What is interesting is that I managed to get the daughter to eat not one, but two burritos with spicy meat.  Initially she balked at the spicy food but then I basically said, quit your whining and try it.  And she did.  And she liked it.  It wasn't super spicy.  And it had all the other good stuff like guacamole and shredded cheddar.  We also had some a nice brown bean concoction whipped up by the Mrs.  So yes, milestone action.  The daughter eats spicy food.  Story at 7:00.  (its 7:00 right now so you see what i was going for there).  Otherwise week two in the new place is going well.  Good weekend with some nice bike riding and playing outside.  We played by the river today.  I arrived back home to find the remains of a picnic and some serious playing going on.
Posted by Fall Garlic at 7:24 PM 3 comments:

It is possibly the end of an era, maybe more of an epoch really. The Easter Bunny doubt has started to creep in. The oldest is seven going on seventeen these days and there was some distinct doubt being spouted in the back seat on the way home from "How to Train a Dragon." which was very exciting and though formulaic enjoyable. Shout out to Chris, the best trailer was for a movie called the last airbender. Anyways, back to doubt. With the last tooth that was lost there was some serious investigation. Notes were written to the tooth fairy and the hand writing on the response notes was matched with parents writing to see if there was any conclusive evidence, none was found. However, Easter is taking a beating. She knows that parents hide the eggs for the hunt but is still not certain how the chocolate enters the house. I have to admit that I am not really as down for the subterfuge as many of my parenting peers seem to be. I mean in our daily walks to school we are debunking organized religion these days, how can I look myself in the mirror if I am trying to hold on to the Easter Bunny. This may be one of those paradox's I just have to live with.

On a different front we have successfully sold our home, packed up our junk and got the hell out of there. We are still moving in to the new place. An alarming amount of our stuff is moving in with us. The storage is almost full but it looks like it will take the rest of the stuff we planned to pack in there. I am worried about the stuff we didn't plan to pack in there and now look like we are going to try to. Here are some pics of the new place. 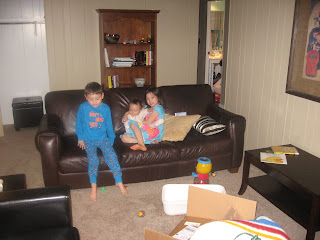 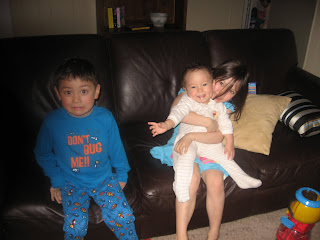 Close up of the three for Auntie Joey who asked. We will try for head shots some time soon. 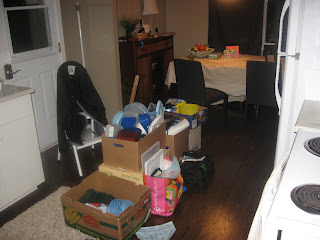 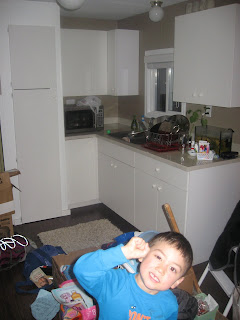 The son photo bombing another picture. This time of the kitchen facing the other way. Nice enough but small. 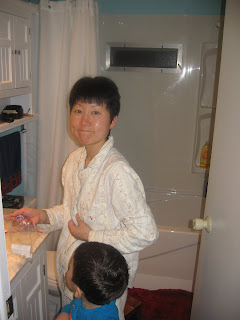 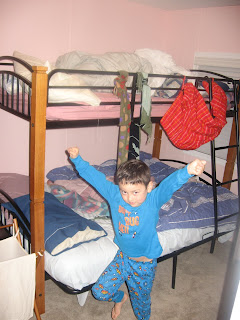 The kids are loving the bunk beds. I took a trip back in time and we played pirate ship on them. I honestly can remember doing that when I was like five years old. Maybe only Auntie Joey will remember that. Down stairs at the Keith Road house. 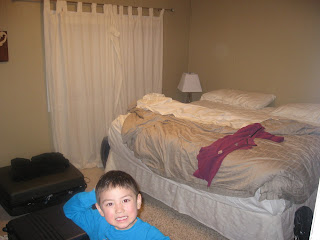 Here is where the Mrs. and I bunk down. King sized glory. Thank goodness I will be spending a year in Japan. The Queen will be super sized by the time we get back. Otherwise it would be pretty hard to down size. 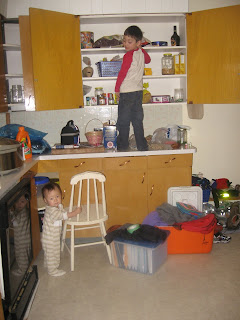 This is the final picture taken at the old house. Caption, " do you want crackers or cookies?"
Posted by Fall Garlic at 10:30 PM 1 comment: