or "Day to come and see what we learned in school". 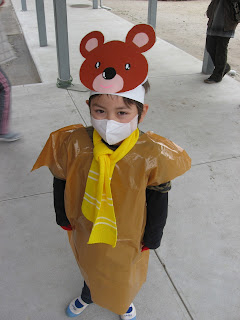 The son's is second row from the bottom, second from the left. 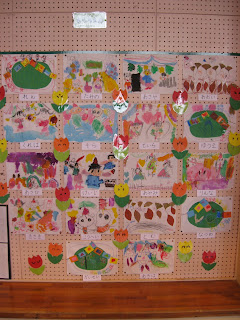 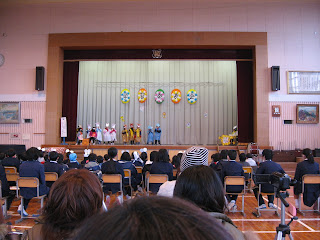 So today I was up for attending the son's kindergarten performance.  Very cute as these things tend to be for kindergartens.  And a surprising reminder that the Japanese school year is fast drawing to a close.  Here is some video of the little guy in action.  The editing leaves a lot to be desired.

Posted by Fall Garlic at 8:45 PM No comments:

To cut or not to cut.

Wow was that an ordeal.  A little background.

When the daughter arrived home from school this afternoon the Mrs. was out.  The daughter was terribly excited with the prospect of cutting her hair and having bangs.  So excited in fact that after her math homework this was the topic she chose for her every other day journal entry.  Or course she had it all written out before her mom arrived home.

Enter the Mrs.  In her defense she is leery of taking any steps that might make school attendance more challenging.  Imagine the "I hate my hair and I am not going to school" scenario.  So the Mrs. raised the prospect of some of these issues before getting down to the business of cutting.  These issues of course had never occured to the daughter so now she is torn.  There is the excitement and anticipation of the new look, along with the fact that she has done the pre-emptive journal entry; counterbalanced with the possibility of being noticed and ridiculed at school.  So half an hour of tears and back and forthing and I had had enough.  I guaranteed her 100% that everyone at school would love her hair and call it cute.  Sure I went out on a limb but I think the guarantee was pretty safe.  Talking to other parents in the class the daughter is kind of idolized.  Apparently there were a bunch of boys at the beginning of the year who were afraid to talk to her because she was so "cute."  And there has yet to be an episode of playing with friends that ended in anything other than a "how soon can we play together again."  So I don't really foresee any problems.  However, I do take my guarantees pretty seriously.  I sure don't look forward to my first back fire. 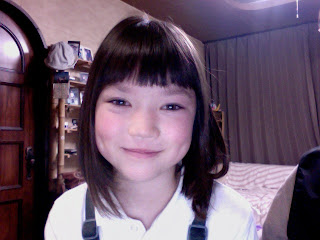 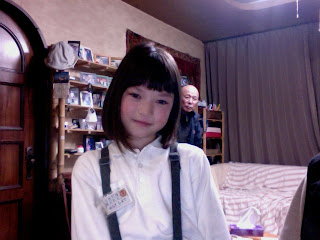 However, check out the pics.  I wasn't wrong.
Posted by Fall Garlic at 2:06 AM No comments:

As the title suggests there has been a slight lack of interesting stuff here recently.  The little guy had a week of up and down fevers but no other symptoms.  Now the older boy is in his second day of bed rest.  He is coughing, sneezing, mild fever.  The problem is that he is weak with sickness.  Not that he is weak right now, it is just that sickness seems to have a much greater impact on him than the other two.  He is the one who will cough himself to the point where he throws up.  He is the one who spikes the crazy fevers.  He is the one who freaks the Mrs. out when he gets sick.  So I am spending a lot of time just hanging out with him in our room. Lots of fluids and videos.  He is loving it.  If only we had more videos.  Well I just started working on the more videos problem.  My apologies to those of you who make their living off of copyright.

In other news I am going into my second week of having a cough.  Every so often I manage to bring up something but mostly it is just a nagging dry cough.  No other symptoms and I don't feel sick.  I am putting off going to see a doctor but it definitely isn't getting better on its own.  So it looks like a trip to the doctor lurks in my future.  The real question is who do I go and see.  Is it off to the ear nose and throat doctor that we like or do I look for an internist?  Well I am sure of one thing.  Either I will die or I will get better?

Other recent developments include the possible pushing back of our return to Canada.  It is now looking like the 9th of May will be our take off date from kagoshima. We may take a side trip to Niigata during our layover in Tokyo.  This would put us back in Canada around the 12th or 13th.

Oh, I forgot, yesterday I had kind of an interesting activity with the daughter.  In the afternoon I went up to the school to see all the grade two students demonstrate their jump rope skills.  They also played their pianica's (a cross between a piano and a harmonica.) 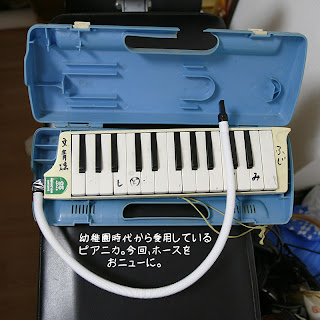 This was followed by a dodge ball tournament.  First the classes played a round robin.  Then each class played against their mothers (and me).  It was a fun afternoon, even though the kept asking all the "mothers" to come here or all the "mothers" to do this.  I tried to take it in stride.  I was the only dad there.

This evening the Mrs. is heading out to meet up with some high school chums.  The same chums who flew over to our wedding.  It was supposed to be families but I will be home with the boys.  You could call us sick, sicker and on the mend.

So we start today with a local new years festival.

This was a giant Demon built out of bamboo.  We arrived late so I didn't get to see what the thing actually looked like before they lit it.  However, here is a picture of one I found on line.  No striking demon resemblance but very burnable. 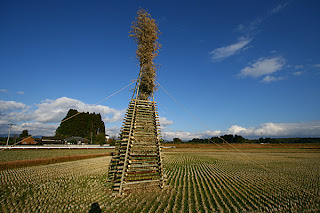 Now at home I have been on a building kick recently.  First we made a bead necklace.  Then we made a jigsaw puzzle.  Both of these were documented in my last post.  From these I moved onto this cat. 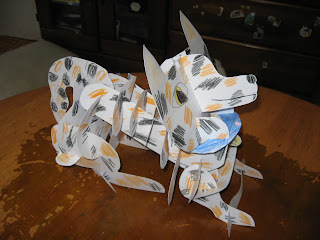 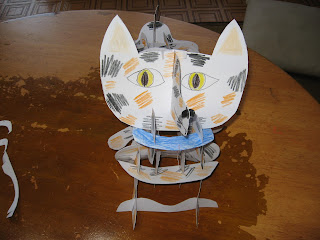 I don't know what was driving me but I just felt like trying this out.  There were lots of mistakes and trial and errors along the way but in the end it got coloured and I was pleased with the result.  Coincidentally the daughter had the option of bringing something she made over the winter break to school on the her first day back.  Honestly, I had not heard anything about this.  She took the cat and was very proud of herself.  I was feeling pretty good too. 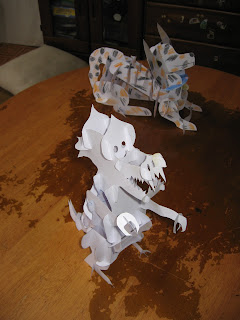 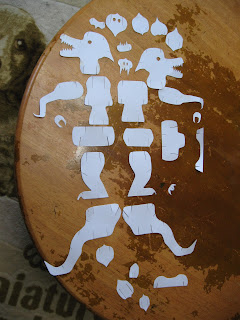 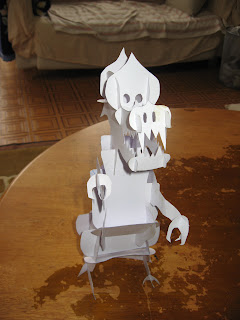 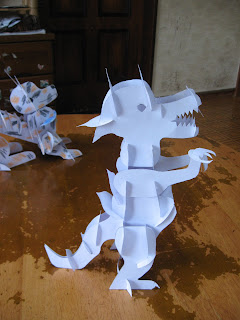 They are both made from stiff paper,  quite a bit stiffer than construction paper.  I used regular paper for each original piece and then fiddled with the cuts until they were in just the right place.  Then I traced the model onto the stiff paper.  I was pretty surprised at how well it all worked out.  I was going to colour the dinosaur but after two pretty full days of working on it I was done.  And the son got to take it to school and show his friends.  I don't know how long they will last but they are infinitely recyclable.  I am still considering making an alligator as that was my neices request.
Posted by Fall Garlic at 8:53 PM 1 comment:

Ringing in the New Year.

So I guess you could call this an update post.

To start with before new years we had a dump of about 25 cm here.  The snow stuck around for about five days and almost stopped the Mrs. and me from getting in a long run.  It did not however stop the kids from having a good time. 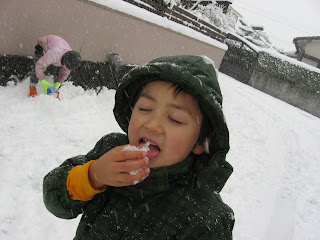 Of course with the snow comes the cold crappy weather of January.  I am telling you it could be Grand Forks in April.  And without central heating it means staying in the one room with a space heater.  It also means shouting at any kid who enters the room or leaves the room without shutting the door.  Our oldest is easily the biggest offender.  So what do we do when it is cold and crappy.  We hang out in doors. 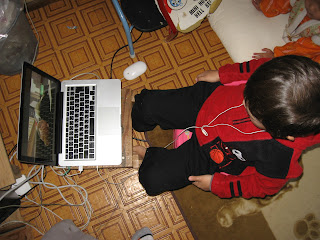 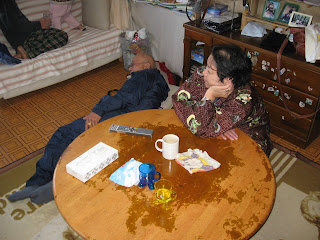 The last couple of days the oldest boy has been sick.  So I have activated my crafting gene and whipped up two activities.  Activity one was making a paper bead necklace.  Basically you make long isoceles triangles (no I will not explain which type of triangle that is) out of coloured paper.  You then roll them around something thin and cylindrical and glue down the last bit of the tip.  After stringing together three bracelets for the little ones the daughter finally got to make her necklace. 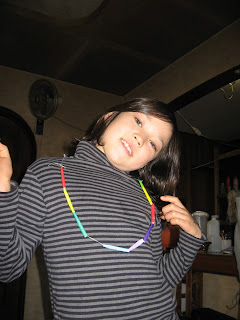 She is still wearing it today, so that is a win.  The next project was started this morning and completed this afternoon.  a) We started by taking pictures out of a magazine and making a collage.  b) Then we cut up the collage to make a jigsaw puzzle.  Part a) was easy and fun.  Part b) gave clear definition to why there is a saw named after a puzzle.  It is the other way around.  You make this type of puzzle using a jigsaw.  Using a dull exacto knife is time consuming, frustrating, and not particularly effective.  Next time I will use stiff paper instead of cardboard. 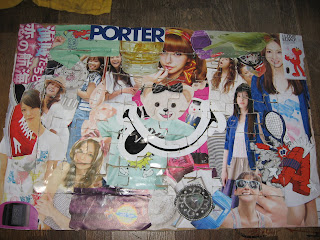 Other than that the kids are back to school next Tuesday.  I am looking forward to getting our routine back up and running.  Lots of people with free time stuck inside together is not always a recipe for fun.  Sometimes but not always.

ps.  We also went and picked up the pottery we made back in November.  It was glazed by some professionals and looked pretty good.  While we were out the Mrs. got to making some homemade bread.  Here is a picture of our current works of art. 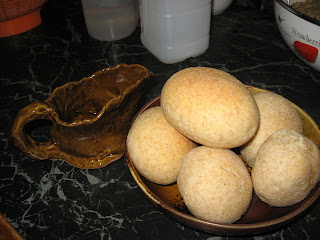